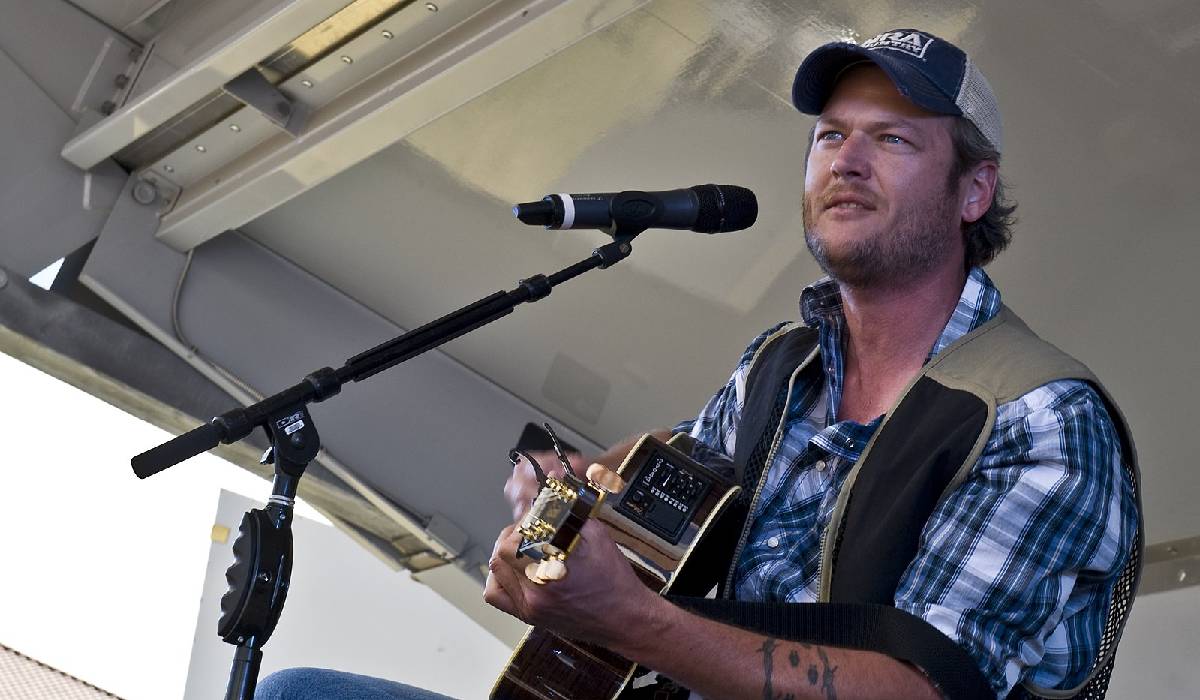 Do you love country music and classic Christmas songs that bring cheer to everyone around the holidays? If you answered yes, this list is just what you need to get in the Christmas spirit.

Blake Shelton is one of the hottest country music stars around and having him sing our favorite Christmas songs just makes sense.

So don your cowboy boots and your Santa hat as I take you through my list of the 10 best Blake Shelton Christmas songs of all time!

Blake Shelton teams up with then-wife Miranda Lambert in this 2012 cover of a popular Christmas song that was first released in 1957. “Jingle Bell Rock” is an original song by Bobby Helms, but it undergoes a country makeover thanks to Blake and Miranda.

Who says Christmas can’t have a country music feel to it? Shelton made this song perfect for Christmas in the country and recorded “Jingle Bell Rock” for his album Cheers, It’s Christmas. Add it to your playlist and give it a listen this holiday season.

2. You Make it Feel Like Christmas (Feat. Gwen Stefani)

It seems that Blake Shelton has a bit of a habit of recording duets with his wives as he features at number two on my list with “You Make it Feel Like Christmas,” which features his now-wife Gwen Stefani.

An unlikely pair, the two will have you feeling all warm and fuzzy when you listen to their 2017 duet that featured on Stefani’s single. Add some love to your Christmas season with this love song from two great artists when you listen to “You Make it Feel Like Christmas.”

Give Blake Shelton, and his country Christmas song a listen and see if this is one that you will be keeping on your Christmas playlist.

4. Santa’s Got a Choo Choo Train

Traditionally Santa is pictured with a sleigh full of presents, but in this 2012 release by Blake Shelton, Santa has a new ride to help him deliver gifts to homes across the world. “Santa’s Got a Choo Choo Train” was recorded for the album Cheers, It’s Christmas and gives Santa a country makeover.

Imagine everyone’s favorite bearded man in a different way when you listen to “Santa’s Got a Choo Choo Train,” as it features on my list at number four.

Coming in at number five on my playlist is an original song by Blake Shelton that features the vocal talents of Xenia. “Silver Bells” was recorded in 2012 and is a song that deals with the emotions of Christmas.

Whether you are alone this Christmas or surrounded by friends and family, the Christmas season can be difficult to cope with. “Silver Bells” touches on this “depression” and is an eye-opener that will make you more aware of the feelings and emotions of those who may be lonely around the holidays.

The Pistol Annies make an appearance on Blake Shelton’s hit song Blue Christmas. Featured on the album Cheers, It’s Christmas, the song is an original by Elvis Presley, who recorded the song back in 1957.

Listen to Blake Shelton and the Pistol Annie’s take on this Elvis hit when you add it to your list of the best Blake Shelton songs for Christmas this year.

Christmas in the country is different from that of the city and comes with a different feeling altogether. “Oklahoma Christmas” was recorded by Blake Shelton and Reba McEntire in 2012 for the album Cheers, It’s Christmas, and it takes a deeper look at what Christmas in the South is like.

Enjoy this snowy, emotional ballad about Christmas in the South, and give it a listen while sipping on a mug of eggnog on a snowy December night.

Blake Shelton shares his religious convictions with this 2012 release of his emotional tribute to God. “Savior’s Shadow” is a reminder to all to remember God’s grace and love this Christmas, and featured on the album Cheers, It’s Christmas.

The song comes in at number eight on my list of the best Blake Shelton Christmas songs and is ideal for those who love the powerful voice of this country music star.

“Holly Jolly Christmas” is one of the most popular holiday songs that you are sure to hear in malls across the world as we head into the festive season. But have you ever heard this Christmas classic sung with a country accent?

10. Two Step ‘Round the Christmas Tree

Blake Shelton gives Christmas a bit of a Western makeover with this hit song, “Two Step ‘Round the Christmas Tree.” The song was recorded in 2012 and is a country-themed Christmas song that will add some country flair to your holidays or that holiday party you are hosting this December.

“Two Step ‘Round the Christmas Tree” comes in at number ten on my list and is a must-listen for Shelton fans. Give it a listen and add it to your holiday playlist immediately for a good time.