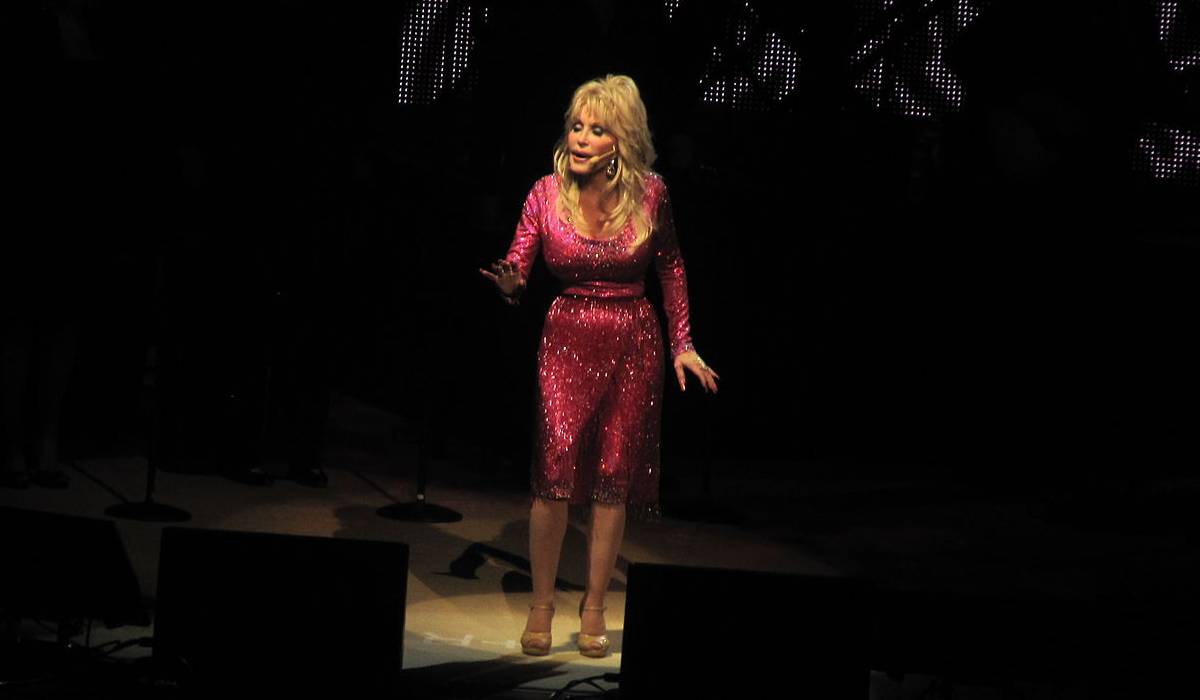 An artist that’s considered by many to be an American classic, Dolly Parton is a national treasure that will always be a part of country music history. Her signature vocals and endearing nature have made an impact on millions of people.

Over the years, her discography has become quite large, and it’s filled with numerous hits.

In this article, I’m going to shed light on the 10 best Dolly Parton Christmas songs from her career!

Featuring a melancholic acoustic top melody, this song also offers emotional piano notes that envelope listeners. Dolly’s voice is sweet to the ear, and the calming nature of the record is perfect for the holiday season.

There’s a mildly catchy tempo that provides an uplifting dynamic among solemn instrumental melodies. The production quality is stellar on its own, and Dolly acts as the final piece to the puzzle that makes the song sound whole.

“I Saw Mommy Kissing Santa Claus” is a Christmas classic, and Dolly does a great job with her rendition as it comes with a nod to the original while featuring the sound she’s known for. Her voice is essentially flawless every step of the way.

There’s a whimsical nature to this record that also features a hint of cheeky comedy and carries an infectious tone that makes you want to sing along. Dolly’s music is a true gem in this world, and her artistry works perfectly with the Christmas theme.

3. Christmas on the Square

With many effects and melodic choices that carry the sound of Christmas, this record is also infused with many elements of folk and country music. The layered vocals bring a sense of joy that can’t be ignored, and the jig in the tempo is more than enough to get you moving.

I’d say this is one of the best Dolly Parton Christmas songs due to its wholesome dynamic, as the record can be enjoyed by anyone. With erratic orchestral and banjo melodies, there’s plenty to love about this song.

Taking the tone down a notch, “Mary, Did You Know?” focuses on a more melancholic and somber dynamic that’s likely to pull at your emotions. In between the vocals are many reverberated, rippling melodies that enhance the song’s production value.

As the layers stack on, the dynamic range in her vocals can become a little overwhelming, yet they’ll keep you around for a full listen. It’s a stellar track from a production standpoint and sounds perfectly constructed for a vivid story.

5. Once Upon a Christmas

There’s a sentimental tone all throughout this record, and it offers a blend of real-life and fantasy-driven beliefs. You’ll also find the instrumentation does an excellent job of supporting the dynamics of both singers’ vocals.

With many highs and lows, the track goes through waves of emotion while painting a visual picture for the listener. Although the record is pretty downtempo, the instrumental melodies alone are quite cinematic.

6. I Believe in Santa Claus

In the usual Dolly Parton style, “I Believe in Santa Claus” has all of the elements of upbeat country music, and the layered melodies don’t disappoint. There is a range of vocals on this track, which do a great job of complementing each other as the story progresses.

The instrumentation may not change much, but it’s enticing enough to reel you in all the way to the end. With many aspects focusing on the cheery nature of Christmas, it’s a record that’s perfectly constructed for the holiday season.

7. The Greatest Gift of All

Another record from Dolly Parton and Kenny Rogers, they’re a duo that’s a recipe for success regarding Christmas music. “The Greatest Gift of All” carries an ethereal dynamic with many dreamy melodies and velvety vocals on top.

I’d say this is one of the best Dolly Parton Christmas songs, as it captures the holiday theme while sending a legitimate message that anyone can appreciate. Of course, supporting vocals from Kenny Rogers make this record all the more impactful.

8. A Christmas to Remember

With a nice blend of synth and organic melodies, this record comes with a groove that’s immediately infectious. What stands out to me is the catchy bass line and the tempo the song carries.

“A Christmas to Remember” is a song that’ll make you start tapping your foot at a minimum, and I’d even say it’s a song that’s relatively danceable. Many elements of the instrumentation encapsulate the whimsical nature of Christmas, and the lyrics are what bring the whole theme together.

This is another record with an excellent groove, from the bass line, guitar melodies, and driving percussion. Many aspects of this song make me reminisce on the production styles that were popular in the 80s, and I feel this is one of the best Dolly Parton Christmas songs on this list.

With a loving tone in the lyrics and supporting melodies, “Christmas Without You” is a rather wholesome track that would greatly benefit any holiday playlist. You’ll hear swelling dynamics that don’t hold back on tugging at your heartstrings.

For the last record on this list, I felt it was important to include “White Christmas,” as its dreamy and soft approach acts as a great backing track on Christmas morning. The production is pretty simple across the board, but every note comes with a substantial impact that’ll directly affect your mood.

There’s a sense of calmness that washes over you when listening to this record, a lot of which has to do with Dolly’s excellent vocal dynamics. In between the lyrics, the song fills in the open space with full orchestral melodies that couldn’t sound any more whimsical.