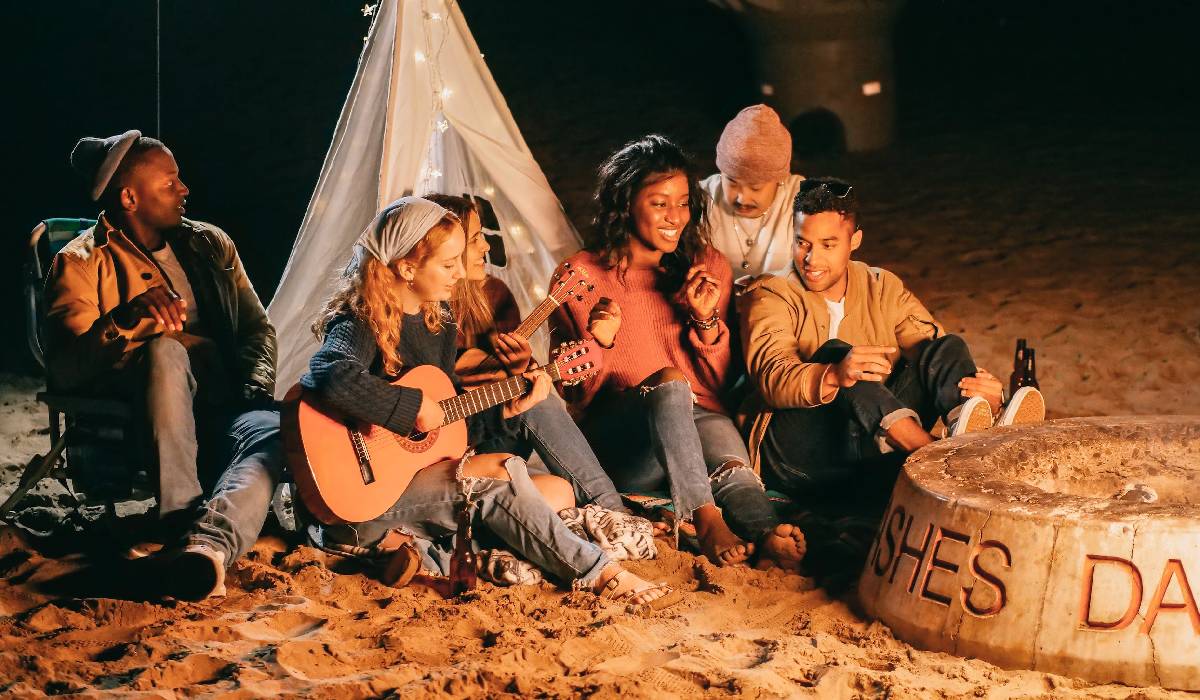 Ahh, camping – there is just nothing else like that feeling of gathering around a campfire with your friends, toasting some marshmallows, and sharing spooky stories. The only thing that makes this better is when someone busts out their acoustic guitar and starts a sing-along!

I’ve always loved how campfire music can bring people together, and with my annual camping trip just around the corner, what better time to compile a list of my favorites?

So without further ado, here is my list of the 10 best repeat after me campfire songs of all time!

To start my list of the best repeat after me campfire songs, it simply has to be “Goin’ on a Bear Hunt” for me. Now, depending on where you live this might be called “Lion Hunt” instead, but where I grew up in the UK, it was always a bear.

This was the first song I thought of because it’s fun, adventurous, a little bit spooky, and overall a great warmup song if you’re just beginning to gather around the fire.

There’s no denying that campfire songs are often funny, cheeky, or even damn right rude, but it’s important to remember the more serious side of these songs. A prime example of this is “Kumbaya”, a gentle and quietly-sung African-American folk song.

Back in my scouting days, we’d often sing this to wind down before bed after a long and loud singing session around the fire. It’s a truly beautiful piece of music.

Next up on my list is “Campfire’s Burning”, and I would actually argue that this is the most important song on this list. The lyrics literally invite anyone nearby to “draw nearer” and gather around the campfire, making it a fantastic song for the beginning of the night.

I have many memories of sitting with friends around fires both as a child and as an adult, listening to this song, and watching the fire roar.

When I was 15, I had the once-in-a-lifetime opportunity to travel to Canada with my Explorers Scouts troop, and man was it an experience to remember. Everything felt bigger, more interesting and newer to me than in the UK, and campfire songs were no exception.

I’d tasted Reese’s Peanut Butter Cups before, but was shocked when a Canadian scout group showed us this song! We took it back to England after that trip, who knows where it could have spread by now!

As I mentioned in that last song, these campfire songs spread around the world through word of mouth, and this next song “Ging Gang Goolie” is no exception. This song, which is 100% gibberish, originated in Sweden in 1905, yet it is sung all around the world.

Can you imagine the shock of the dude who wrote that song if they knew how famous it was today? I bet they weren’t expecting it to blow up like that!

The best repeat after me campfire songs will always be short, simple, and easy to remember, but this next song “One Man Went to Mow” takes that to the next level. This is easily the simplest song on this list, so it’s particularly good if there are kids around the campfire.

It also just goes to show that you can write a classic piece of campfire music about literally anything – even the mundane act of mowing your lawn!

A lot of the songs I’ve listed so far have fixed lyrics that are the same worldwide, but some songs such as “Down By the Bay” invite singers to invent their own lyrics. Lyrics that are particularly funny will often be used again, and passed to other troops, so the song never stops evolving.

This was confusing when I was a kid as I was always getting confused about the “actual” lyrics, but it turned out that there was no such thing after all!

Campfire songs are overall pretty wholesome, but I’d be lying if I said that this song didn’t traumatize me a bit as a young scout. There are clean versions of this song, but in my boy scout troop, the song told the tragic story of a young girl who found a rotten peanut, ate it, and died.

There was just something about the sad lyrical content contrasting with the happy melody that I thought was really creepy. Definitely save this for when the kids have gone to bed!

9. You’ll Never Get to Heaven

The penultimate best repeat after me campfire song is one of my all-time favorites – “You’ll Never Get To Heaven”. In this song, the leader goes through a long list of random objects such as jam jars, sardine tins and shoeboxes that are simply not suitable vessels for a visit to Heaven.

It’s a classic tongue-in-cheek campfire song that I always thought was quite wholesome, despite having lyrics about death again. What’s that all about!?

I’ve talked about some of the best repeat after me campfire songs today, and I encourage you to learn and enjoy them with friends on your next camping trip. However, why don’t you try to come up with your own song? It can be really simple, funny, naughty or sweet, and you can even take the melody from your favorite song.

Who knows – word spreads fast, and if you spend an hour creating a campfire song with your friends, your song could travel across the country, the continent, and maybe even go worldwide like songs such as “Ging Gang Goolie”.

10 Best Songs About Falling in Love With Your Best Friend

10 Best Songs About Roses of All Time, Ranked