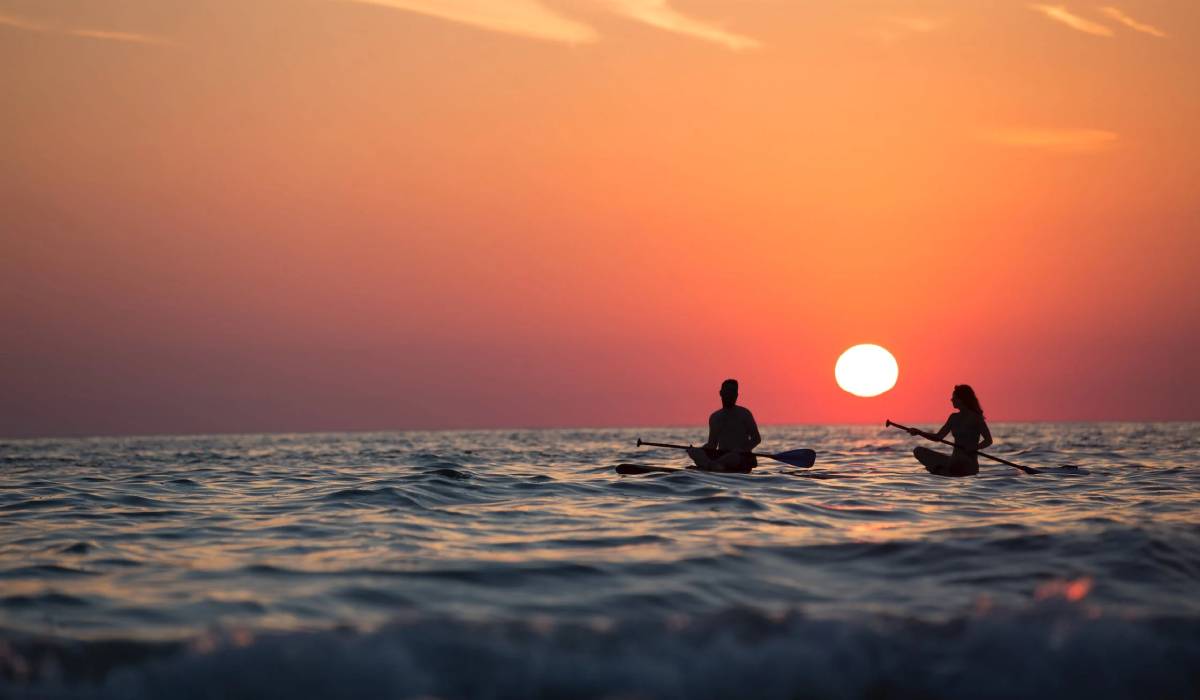 Do you often watch the sunset and think about the great mysteries of life, love, and everything else in between? Many people find comfort in watching the sky change color as the sun sets, and it is a popular theme in music, too.

Sunsets can describe loss, a wish for something better, or simply that the end of something is near.

So without further ado, here is my list of the best songs about sunsets!

1. What Makes the Sunset? By Frank Sinatra

Frank Sinatra shares his feelings on how powerful love is in “What Makes the Sunset?” Released in 1945, the song tells of a love like no other and describes it as being so powerful that it can make the sunset.

No one can capture the feeling of love quite as well as Frank Sinatra does in “What Makes the Sunset?” so be sure to give it a listen. The song is number one on my list and makes for easy listening.

No music list is complete without a country song, and for this list, Neil Young’s “California Sunset” is the perfect addition. The song was recorded and released in 1985 on the album Old Ways and is an ode to living the life the singer dreamed of as a young man.

California was often seen as the promised land, and “California Sunset” is a celebration of sorts that has the singer feeling like he is living his dream. Neil Young was inducted into the Songwriter hall of fame in 1995, and it is clear to see why when you listen to the lyrics of “California Sunset.”

3. Two Suns in the Sunset by Pink Floyd

Pink Floyd’s “Two Suns in the Sunset” has a dark history and is about the singer’s fears of a second Nuclear war in England. Released in 1983 on the album The Final Cut, the singer refers to an atomic bomb cloud as the second sun and describes the war’s impact on his life.

Not many people had heard of Petit Biscuit until their song went viral on the music and video streaming app TikTok. Now a fan favorite, the song “Sunset Lover” was released in 2017 on the album Presence and is a dance hit that is perfect for the club.

“Sunset Lover” is about the memories of an old relationship and will have you, too, dreaming of your ex and wishing that things could have been better. Give it a listen when you add it to your summer hits playlist, and sing along if you know the words.

California has not always had the best reputation. It is often seen as the underbelly of America where money talks and the people are faker than that Rolex you were offered on the street corner. Red Hot Chili Pepper’s 1999 song “Californication” explores this “fake” society as it takes on the deceit and desperation of those who move to Cali to make it big.

The song has a psychedelic sound and is one of the band’s biggest hits that has sold millions of copies. Add “Californication” to your playlist and sing along to this iconic 90s song.

6. Here Comes the Sun by The Beatles

There is really no denying the fact that The Beatles were one of the best band’s in the history of music. Starting their career in 1963, it was only a short time before they were a household name across the world and released some of the best music ever.

One of these songs, “Here Comes The Sun,” is a sweet song released in 1969 on the album Abbey Road and speaks of finding happiness again after the pain of a breakup.

While the song’s lyrics do not actually make mention of a sunset, it is clear that the sunrise is a metaphor for the good times after the darkness of heartache and depression.

“Sunset Boulevard” is just one song featured in the musical of the same name by composer Andrew Lloyd Webber. Known for his hit musical Cats, the composer is one of the most popular music composers in the world and uses stunning imagery to bring his music to life.

“Sunset Boulevard” was released in 1991 and told the story of the bad side of a dream. Give this iconic masterpiece a listen and be sure to download it for your playlist.

8. Something in the Orange by Zach Bryan

“Something in the Orange,” is a song by singer Zach Bryan that explores the feelings of a man that has just come out of a relationship.

Comparing the end of a relationship to the sunset, “Something in the Orange” was released in 2022 on the album American Heartbreak and gave listeners a sense of hope that the end does not necessarily mean the end.

Give this love ballad by the talented Zach Bryan a listen and add it to your heartbreak playlist. It is goosebump-worthy!

Deep Purple shows that you should never ever go to bed with regrets in their song “Wasted Sunsets.” Released in 1984 on the album Perfect Strangers, the song has a powerful message that you should do what makes you happy, regardless of what others will think or say about it.

Life is way too short to sit and worry about what others think, so live your life the way you wish to, and don’t ever regret the choices you make. Take inspiration from “Wasted Sunsets” as you do what you want to do in life.

American Idol judge Luke Bryan’s song “Sunrise, Sunburn, Sunset” brings me to the end of my beautiful list of the best songs about sunsets and tells the sweet tale of a boy who falls madly in love with the most beautiful girl one summer.

Released in 2017, the song follows the story of a boy who is hired to paint a man’s lakehouse. After meeting the man’s daughter, the two have a beautiful summer romance that sees them spending every spare moment together. “Sunrise, Sunburn, Sunset” is a love song with a difference and is the perfect addition to my playlist.