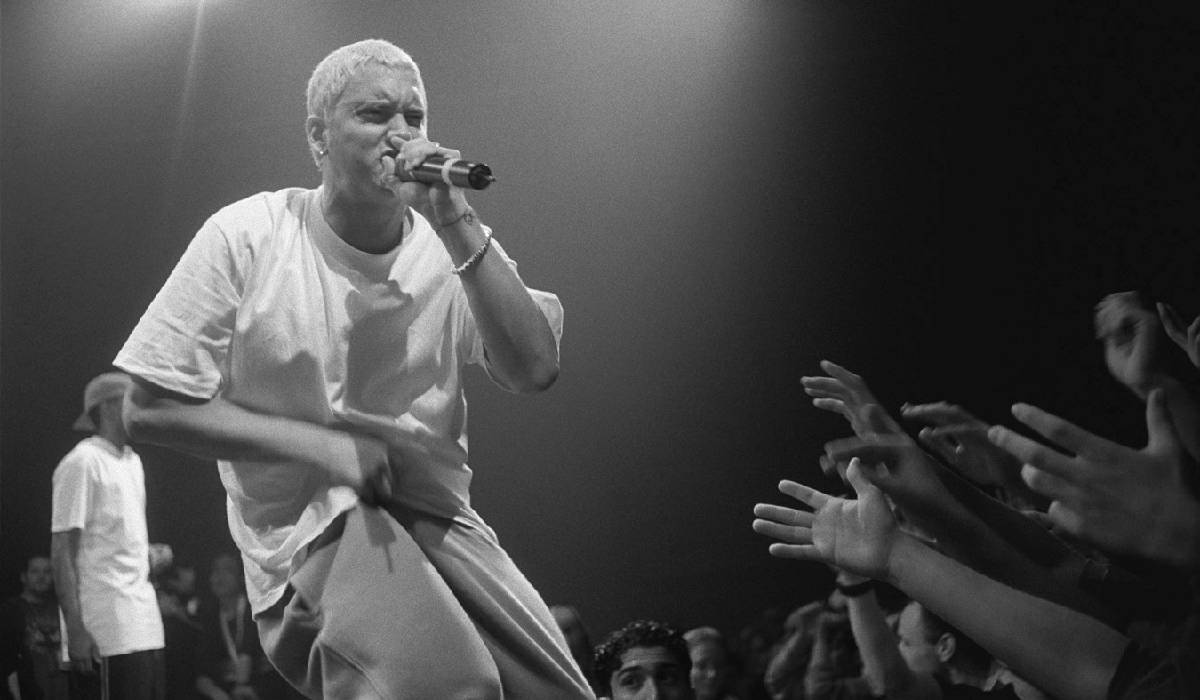 American Rapper Eminem is a talented wordsmith and record producer whose claim to fame is popularizing hip-hop within the United States.

Eminem hails from Detroit, just 45 minutes from my hometown in Southern Michigan. I still hear “The Real Slim Shady” on my local radio. But when it comes to speed, it’s got nothing on these 10 flaming tunes. His work is, quite literally, record-breaking.

So without further ado, here is my list of the fastest Eminem songs of all time!

The 1995 release “Biterphobia (Soul Intent) is a scorcher of a demo track. While this song is actually considered underground, I think it deserves to be on the list. This is one of the fastest tunes he had done before “Rap God” came out.

The song has that old-style record-scratching beat with a lo-fi feel. Later, a funky, repetitive guitar riff comes in. Biterphobia has a wildly fast second verse.

This one is raw-feeling and calls out all the ‘biters’ or people who steal others’ creative ideas and try to pass them off as their own.

Many people debate as to whether “Despicable” was actually a real freestyle or not because the flow is so seamless. The mental processing in order to do this on the spot could only mean one thing; he’s pure genius.

“Despicable” is from Unreleased and Rare and is Eminem’s collection of early iterations of songs and demos.

This poetic freestyle starts off with a short violin instrumental, which later adds in a lively snare, and then transforms into an eerie trappy beat. At only 2:20 long, this one is short and con fuoco. The impressive thing about this one is the consistent slow burn, a fire that never goes out, it just keeps burning.

Here’s another freestyle for you. “Fubba U Cubba Cubba” has a catchy, wonky start with plucked strings. This Freestyle also has impressive consistency.

In this scorcher song, he namedrops the classic book, The Art of War, as well as the pop star Madonna.

“Fubba U Cubba Cubba” is known for its nonsense words (hence that title!). That being said, even Eminem’s most playful songs with fake words are turbo-fast and rock-solid.

This quick 2011 tune was featured in the movie Real Steel. Like Biterphobia, this song was not a piece of Eminem’s solo work, but rather, a group effort. “Fast Lane” was created by the Midwest hip-hop duo, Bad Meets Evil, which consisted of Royce da 5’9” and Eminem.

This low-brass heavy bop has a strong gravity to it and is one of my personal favorites on this list.

Related: Saddest Eminem Songs That Will Make You Cry

Bass-heavy “Soldier” clocks in at 94 BPM, but it’s not the tempo that’s speedy, but rather the continuous flow, with barely even enough time to take a breath. Something about this beat reminds me of old Linkin Park.

The lyrics state that Eminem was never a thug, but rather, a soldier, looking for respect and transfixed by guns. The weight on the artist’s shoulders is heavy, but he’ll never slip up

“Lucky You” was released in 2018 and features Joyner Lucas. It starts off innocuous, with running eight-note chimes. “Lucky You” is a slow build, which adds in unsettling french horns as Lucas comes in. At first blush, I wouldn’t have expected it to be one of the fastest Eminem songs.

After a minute and a half in, the subdivision gets fast, and at two minutes, the speed gets kicked up another notch until he is spitting out pure fire. The featured artist even peppers in a bit of Spanish.

Many people suspect that this diss track was directed at Drake, but Eminem denied it. Either way, he called somebody out about having ghostwriters, a veritable rapping sin.

This 2017 song from Revival is a brazen prod at President Donald Trump. Eminem couldn’t care less about who he offended. You’ll have to wait until the end to get to the crazy part.

In the end, there is an unexpected classical addition to the song. Flight of The Bumblebee, a virtuosic piano piece begins playing in the background.  Towards the tail end of the song, Eminem beats his own record (“Rap God”) by rapping 6.71 words per second. This is another favorite of mine from this list because it satisfied my classically-trained ears!

“GNAT” has a gentle short into with delicate guitar and booming bass. In a way, Eminem bashes Trump and Pence for the way they handle the pandemic.

“I will not annihilate, kill them, I’ll f**k around and pile еight million / Dead little juvenilеs, wait, chill, then, I’ll await my trial date ’till then”

“GNAT” is interesting, because it writes out Mike as “mic”. Some folks even surmise that Eminem actually uses this seemingly political song yet again dissing MGK.

And even though this one isn’t record-breaking when it comes to the fastest Eminem songs, it’s still dazzling.

Perhaps the reason why this song is so fast is that it has a diss inside of it, fueled by (understandable) rage. Machine Gun Kelly reportedly called Eminem’s daughter “hot as f****” at the young age of 12.

This song was the beginning of a musical back-and-forth between the two artists. This fast-paced diss track caused MGK to release “Rap Devil”, which then spurred Eminem’s next diss towards the artist, titled “Killshot”. Still, “Not Alike” takes the cake when compared to “Killshot”.

I saved the best for last. The song “Godzilla” broke the Guinness Book of World Records for having the most words in a song. Ever.

“Godzilla” was released in 2020, and toys with the theme of the destructive Japanese monster. Eminem states that he’s an alcoholic right out of the water with the lyric “I can swallow a bottle of alcohol and I’ll feel like Godzilla”.

The song actually features Juice WRLD and was released posthumously. Juice WRLD had reportedly recorded his part for the chorus before his untimely death.

To me, listening to Godzilla is like turning a mesmerizing gemstone around in my hand. Eminem and Juice WRLD look at every different way they could be a Godzilla, from being an inebriated monster to being mythically fast at rapping.

This wildfire song from his LP, Music to Be Murdered By, blew past his former 2019 record of rapping a whopping 85 words in 12 seconds. The third verse in “Godzilla” riffles through 224 words in just over 30 seconds. (31 seconds)

Of the fastest Eminem songs, this one takes the cake.

10 Best Songs About Letting Go of Someone You Love