For this review we are taking a look at the KLIQ TinyTune, a simple and compact chromatic tuner pedal. Just to give a bit of background, KLIQ began producing products that replicated the standards of one of their previous products – the UberTuner. A tuner that is quote: “accurate enough for the studio, fast enough for the stage, and strong enough to survive the rigors of touring.” 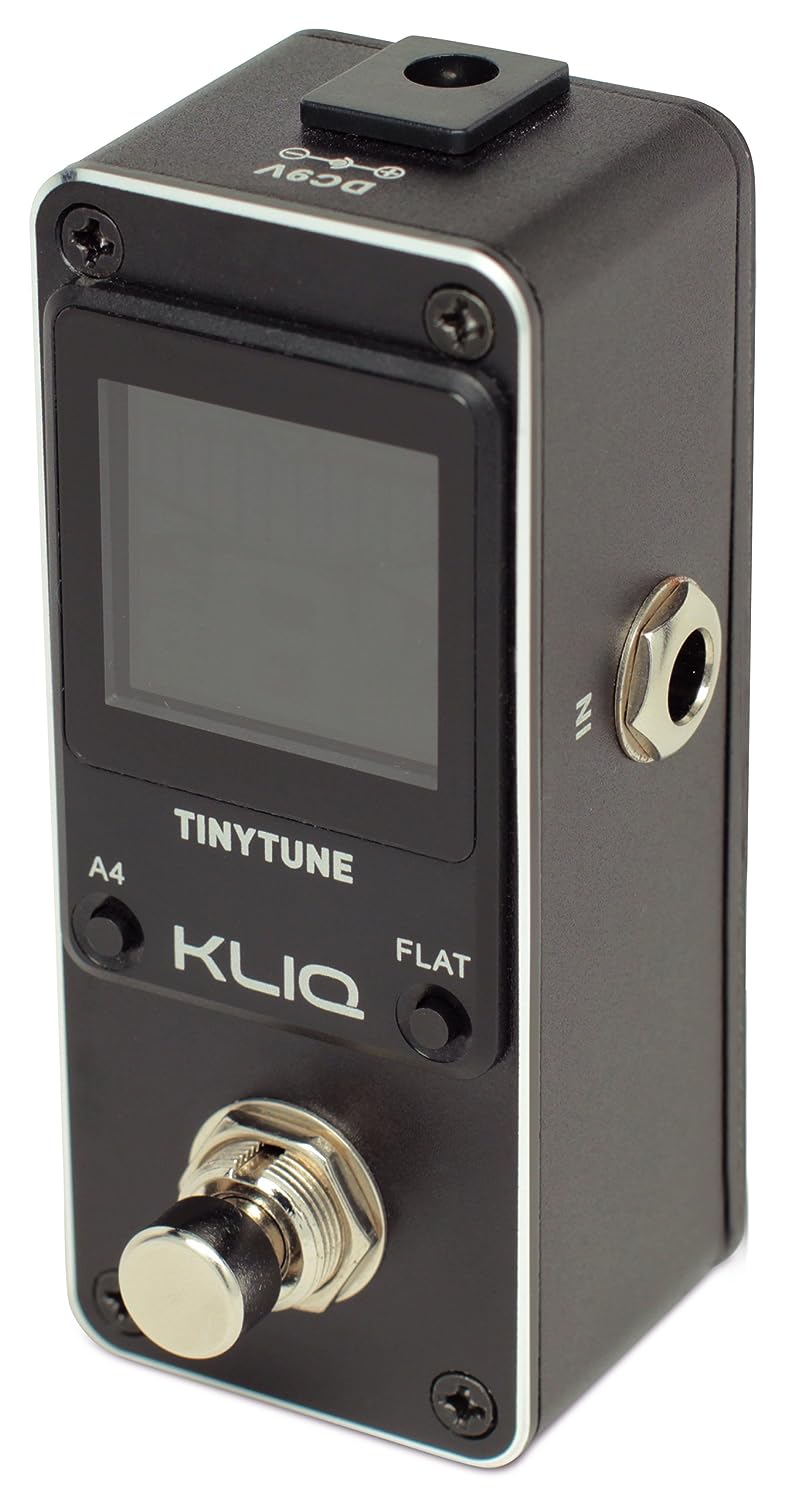 The first notable feature of the TinyTune is the sleek layout of the unit. All the controls are neatly integrated into the pedal, making it appear tidy with minimal clustering.

The Tinytune features a large color display, which takes up roughly half the pedal. The footswitch on the front-panel controls the units power state (on or off). The pedal also features two buttons below the display indicating A4 and FLAT. The TinyTune incorporates an input jack located on the right side of the pedal, and an output jack located on the left side of the pedal. Lastly, there’s a 9V DC adapted jack found at the top of the unit to plug into your power source.

The KLIQ TinyTune is very competitive in price, and is comparable to much more expensive tuners on the market. The TinyTune is approximately half the size of an average pedal, and requires a standard 9 volt DC power adapter supply to power the unit. Due to the compact size of the pedal it is too small for a battery compartment to be incorporated into its design, which is characteristic of most other ‘mini-pedals’.

I was taken aback by how impressive the front color display is. I found it to be large, clear, and has excellent visibility under any lighting. Whether you’re using it on stage, at home, night or day, there should be no problem making out what is being displayed (even if you have poor-eyesight!).

The TinyTune is a true-bypass pedal, so there is no loss of tone. It has shown to be completely noise-free no matter if the unit is turned on or off. The construction is pretty solid, mostly due to the aluminium housing the circuit is encased in. Furthermore, it incorporates the use of high-quality components found inside. Overall, The TinyTune seems to be a pedal that is sturdy and built to last.

The tuning is accurate and picks up the notes fast. The display shows red bars that denote flat, yellow bars for sharp, and a single blue bar for in tune. The colour contrast makes it very easy to read and operate. The chromatic tuner can detect frequencies ranging from A0 (27.5 Hz) to C8 (4,186 Hz), making it suitable for both guitarists and bassists alike.

The pedal comes packaged in a sturdy box, along with a user manual, and a Velcro strip.

The KLIQ TinyTune was definitely designed for the user to spend less time tuning and more time playing. You just simply plug in, tune up, and play some music.

The TinyTune is definitely worth the money as there isn’t really much to fault. The only thing that comes to mind would be its lack of battery. Overall, I’m very impressed with the unit. It caters towards both beginners and pros alike who are looking for a sleek tuner that wont set them back hundreds of dollars.

I would also like to commend the customer service of KLIQ who responded promptly to my concerns. It’s rare to find a company that backs their product 100% these days, and also cares a lot about their customers. Very satisfied with the product.