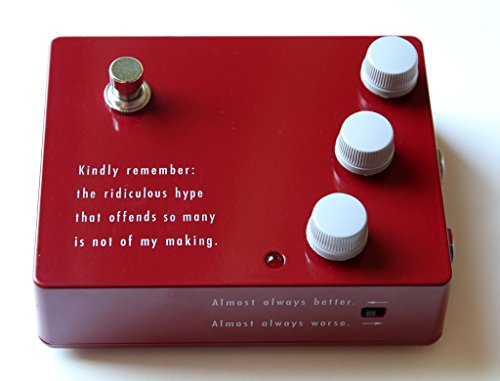 The Klon KTR guitar pedal is a revised version of the legendary Klon Centaur. The circuit is 100% designed by the original manufacturer, Bill Finnegan.

Let’s find out if this is the best overdrive pedal you can buy in our Klon KTR review. Firstly looking at the brief history of its predecessor.

BRIEF HISTORY OF THE KLON CENTAUR

The Klon Centaur was developed and produced manually by Bill Finnegan between 1990 and 1994. It was characterized for its transparent overdrive, which added gain to the signal without steering-away from the original tone of the guitar.

Roughly 8,000 units were produced between 1994 and the early 2000s, and is now a widely sought after collector’s item. They currently sell on the market from upwards of $1500. Many clones have been produced that attempt to replicate the original essence of the Klon Centaur.

Jeff Beck, among various other highly regarded artists have used, or currently still use the Klon Centaur.

FAST FORWARD TO THE RELEASE OF THE KLON KTR

It was in the year 2012 when Bill Finnegan released the successor to the Centuar, the KTR. The pedal features the same circuit as the Centuar, but uses a different method of production, which incorporated some internal changes and allowed the pedal to be manufactured to a smaller size.

Printed on the front panel of the KTR is the text “Kindly remember: the ridiculous hype that offends so many is not of my making.” These words are in reference to the cult following established by the original Centaur.

The Klon KTR is incredibly straightforward. It features 3 control knobs for gain, treble, and output. All of which are pretty self explanatory.

The gain control lets you achieve a creamy overdrive or a simple clean-boost. It’s very noticeable how much headroom the circuit has to offer at lower levels. The transparency means the signal remains unchanged.

The treble control acts more closely to a presence control. It adds slight sharpness, and the ability to cut through the mix a bit more.

Output toggles the overall volume of the signal, which the KTR is able to do extremely well.

The KTR also features a slide switch located on the side of the pedal with the text “Almost always better,” and “Almost always worse.” This option is dedicated to enabling or disabling the true bypass filter. As suggested by the pedal the buffered mode really does sound better. It achieves this by adding more presence to the signal that is not found when using true bypass.

Messing around with each knob I was able to get a wide range of sounds. All the way from a transparent boost to a warm and addictive overdrive. There is definitely plenty of room for experimentation here. It will no doubt keep you heavily occupied as you search for the ideal settings for your needs.

The Klon KTR really does nail the signature sound that the Centaur was known for. I feel like using the pedal in a live or studio setting is where it would shine above the rest. There’s just something special about the tone it can achieve that sets it apart from other overdrive pedals. It’s a superb pedal, even if it’s just used as a boost. Which is one of the reasons I assume many people would initially be drawn to the KTR.

I feel like the price-tag really does cut it for something as unique and special as the KTR. If you dont mind spending that extra bit of money on your equipment then it should be a no-brainer.